I was browsing through Pinterest the other day, and a quote caught my attention.  I had just returned from visiting our son’s family, and had spent a lot of time with our grandson Owen, who will be 3 this coming Monday.

“Children are great imitators, so give them something great to imitate.” (Philip Johnson)

Owen is a well-mannered little boy, always very loving and encouraging to others, with a great imagination, and a penchant for telling the truth.  I could give multiple examples for each of these characteristics to prove I’m telling the truth, and am not just being a proud grandmother (or “grammie” or “grandma” or “grandma Karen,” depending upon Owen’s mood.)

But I realize that Owen is all of these things because of the parents he has and because of their parenting style.  They model the behavior they want to instill in both Owen and Ella, who recently turned 1-year old.

They also model good… no, GREAT, eating habits.  They eat healthy. All of the time.

When Owen was 2, my husband and I were caring for him for the day. We went to a deli for lunch, and I gave Owen a potato chip. He looked at it in puzzlement, took a bite, and then said, “MMMMMM…. .what is THIS?”  Oh, dear. We had to tell Brian and Melissa we had given him his first potato chip.

I was playing a game with Owen, when he was 2 1/2. It was a game using plastic food pieces. I would pick up a piece of food, and he would identify it. We sped through the game, with Owen identifying cauliflower, broccoli, eggs, and all sorts of other foods.  But when I picked up a piece of plastic chocolate…. he paused.  He cocked his head a bit, and I could see the wheels turning inside his head as he was trying to identify what I was holding up. He couldn’t. He had no reference point.

When my husband asked him if he wanted some pancakes for breakfast, Owen said, “No, I want a protein shake.”

When he went to the Meet and Greet at his new pre-school, there were cake doughnuts with white frosting on them.  Owen excitedly told his Mom, “Oh, look, yummy bagels!”

So what happened last weekend shouldn’t surprise me. I shared my yogurt with him, and asked him if he liked it. He said yes. He said he was going to ask his Mommy to buy some Pizza Yogurt for him.  I was a little puzzled until I looked at the label on the yogurt container.  Owen has no reference for a Caramel Apple Pie….. so, yes, I guess this would look like Pizza Yogurt to him. 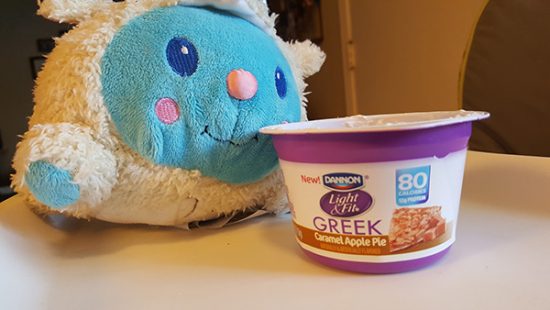 ← Prev: Simple Things Next: What are Layer Groups in Photoshop? →