I love my dog.  He is a Bichon Frise; and, as such, is sweet-tempered, adorable, hypo-allergenic, and doesn’t shed.  What could be better?

My husband and I had been out for the evening.  Riley is an inside dog, so when we got home, we let him out so he could go to the bathroom.  It was late, we were tired, and went straight to bed.  I forgot that in situations like this, Riley likes to go out immediately when we get home, and then again about 15-20 minutes later.  I forgot the second outdoor visit……. until 1:30 am, when Riley woke me up to remind me.

I tried to pacify him with a drink of water, hoping he was trying to tell me he was thirsty. He just stared at me, as if to say… “Come on now, you know that’s not what I want!”

So I trudged outside with him.  That wouldn’t have been so bad if he had just done what he had to do and then come right back. But he decided to go exploring, to sniff the things that smelled different during the nighttime than during the day.  It was dark, really dark, and I didn’t always know exactly where he was.  (Note to self:  If this happens again, be sure to put him on a leash.)  Gazing at the stars and enjoying the coolness of the night air entertained me for only so long.

Finally, after 15 minutes, Riley wandered back to me.  I turned to go into the house, and there was a frog sitting right by the door.  Once I came closer, he scooted as far under the door as he could go.  The threshold kept him from going into the house… but I knew once I opened the door, he would jump inside. I didn’t want a frog in the house. Especially at 1:45 am.  So I went back into the yard to find a stick to tickle him with and encourage him to hop away from the door.  After 2-3 minutes, I succeeded.

I pulled out the “treat” word… (as is, “Riley, do you want a treat?”)…. and he came bounding around the corner of the house. Why didn’t I say that earlier?

We finally went back in the house and back to bed. And there were no frogs in the house. But now I was wide awake. The last time I looked at the clock it was 3:30 am. Two hours of lost sleep because I forgot one simple Riley-Routine.

I was pretty tired yesterday.  Riley, on the other hand, slept most of the day.  That seems so unfair. 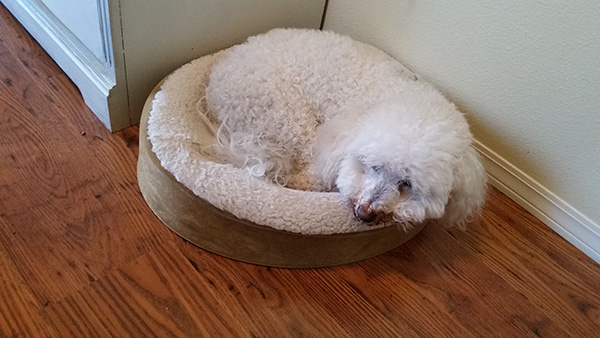 ← Prev: Artsy Textures and Transparencies Next: Using the Healing Brush in Photoshop →