When we moved to Coarsegold 2 years ago, I realized I would need to start getting used to a spider or two in the house upon occasion. After all, we were now living on a mountain, where “wild things” live, as opposed to being in a suburb with neat houses all in a row.  I was okay with that.

Still… my husband sprayed around the perimeter of the house with bug spray that the previous owner left for us.  After all, if he was a “veteran mountain person” and thought that was okay to do, then who were we to argue?

We ran out of spray about 6 months ago, and didn’t replace it.  We wanted to see if it was really doing any good.  We started seeing more and more spiders come into the house, along with some other creepy-crawly things that I don’t even know the name of!

My husband would very carefully pick the little (and big) critters up and take them outside, releasing them into their natural environment. He’s kind. Releasing them outside meant to me that they could come right back in if they wanted. Perhaps I’m not as kind as I think I am.

However, I did continue being respectful of the life here on the mountain. After all it was here first.

But when a bug crawls into my favorite house slippers, hiding in wait to bite me, that’s another story.

This week we hired a Bug Termination Service.  So if you’ve read previous posts where I’ve talked about the centipede we found in the laundry room, the tiny frogs in the bathroom and kitchen, and the tarantula in the dining room…. no worries. It’s safe to come visit us now.

The bugs only have themselves to blame.  I respected them until they crossed the line. 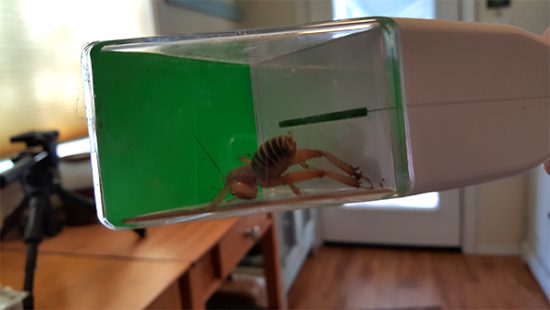 ← Prev: How to Create a Moon in Photoshop Next: What is the Rotation Point in Transform Selection? →