I love that our son Brian, and our daughter-in-law, Melissa, are modeling and teaching good eating habits to Owen, who is 2 years old.

I spent last weekend with them. One of the things I love to do when I am there, is get up with Owen when he first wakes up. There’s nothing like walking into his bedroom, seeing the big smile on his face, hearing him say, “Hi, Grandma!,” and watching him jump up ready to start his day.  (Besides that, Mom and Dad get to sleep a little longer.)

Once I got Owen changed and out into the family room (which he refers to as his “play room”), I asked if he wanted me to fix him some scrambled eggs. “No, I want a protein shake,” he said. Hmmm… “I don’t know how to fix your protein shakes, Owen.  How about a banana?”  “No,” he said.  “I want goji berries.”  Well, I didn’t even know what goji berries were until a few months ago, when he enlightened me.  I told him I didn’t know where the goji berries were, and he said he would show me… which he did.  They were right next to the walnuts, cashews, and almonds (one of his favorite “desserts”), as he pointed out to me.

I gave him a few goji berries. Not long after that Melissa woke up, and Owen got his protein shake.  I was in the living room, and I heard him talking to Melissa. I couldn’t quite make out what he was asking; but a few minutes later, he approached me.  Our conversation went like this:

Owen: “Grandma, can I have some goji berries?”

Me: “Mommy is in charge of the goji berries.”  Owen gave me a funny look and seemed to be thinking; so I asked him, “Do you know what that means?”

Well, how about an orange instead?  I mean after all, not only is it healthy; but once you’ve finished eating the orange, you can use the peel as a telephone. 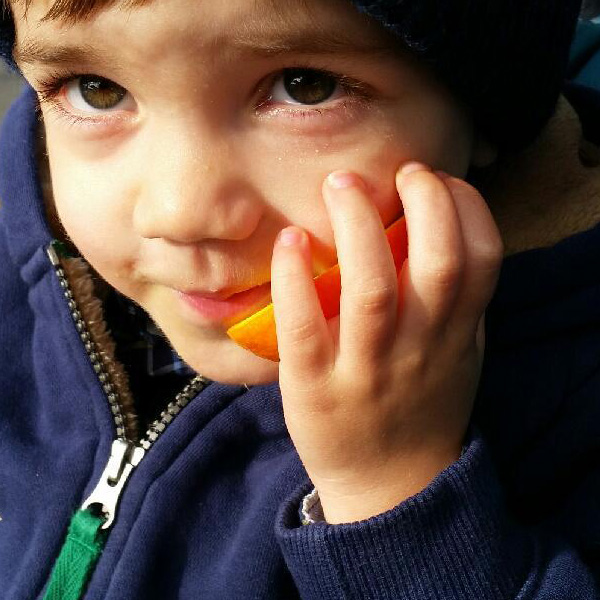 ← Prev: Align and Distribute Objects in Photoshop Next: Stretching your Digi-Stash with Textures and Overlays →