My husband, Rick, is a “runner.”  He hasn’t always been though.

Rick spent his career as a police officer. He was also on the S.W.A.T. Team (Special Weapons and Tactics). As such, quarterly “PT” (physical training) was a requirement.  In order to pass each quarter’s PT, certain standards had to be met, among those a certain running speed. Each month, Rick dreaded the running portion of PT because he was not a fast runner, didn’t like to run, and, although  he always passed the test, came too close to the required speed for comfort.

When Rick left the S.W.A.T. Team, he said he would “never run again.”  Why would he, when it wasn’t required of him anymore? And he didn’t run for the next 25 years.

But Rick answered that question himself 25 years later.  Without as much physical exercise, he gained 20 pounds  his first year of retirement.  He knew he had to do something, so joined a running class at a local sports store.   It was a “beginner’s” class; everyone was on the same footing.  To his surprise, Rick loved the class.  He is a very social person, and enjoyed the camaraderie he experienced with those who were in the class; those who weren’t necessary excited about running (at first!), but were interested in becoming healthier.

By the end of the 3-month class, Rick had been converted. He was a “runner.”  Not only that, but also because of his positive attitude and encouraging spirit, he was invited by the store to hire on as the Beginner’s Class coach. He coached for the next 5 years, and loved it!  During that time he also completed over 50 races, ranging from 5K’s (3.1 miles) to full marathons (26.2 miles); his favorite being the 1/2 marathon (13.1 miles) of which he completed 25.

In 2014 we moved from Orange County to the Sierra Nevadas.  Here, instead of running on flat ground, he was running up and down steep hills every day. He kept running, but was struggling for inspiration to keep up his running schedule.

Early December 2015, Rick learned about “Streak Running,” which is running every single day, a minimum of one mile per day.  This was different from the way he had been trained, which was to take a few rest days every week. However, he knew Streak Running would provide him with the motivation he needed at that time, so on December 5, 2015, he challenged himself to run every day for one year and also to run a minimum of 1,000 miles during that time period.

For the past year, has run through several injuries, in 20-degree temperatures, rain, sleet, fog, and high winds. He has run through days when he had a fever of over 100 degrees.

I have to tell you that on the days he was sick, and on the days when we couldn’t see across the street because of the fog, I asked him if was sure he wanted to run that day. Wouldn’t some discretion be advisable?

Rick disagreed. He had made the commitment, and he would complete the challenge.  Today is December 2nd. He has 3 more days before he completes his goal.

I’m very proud of him. Not just because he has taken his health seriously and has chosen to embrace a healthier lifestyle, but also because he made a commitment – not just this year, but as long as he is able to continue running. And despite personal injuries, illness, and adverse weather conditions at times, he kept that commitment.  No matter how hard it was. He’s just that kind of man. 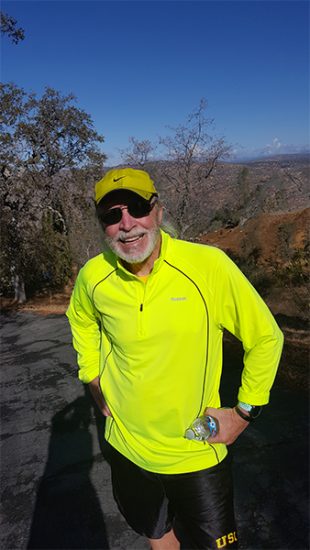 ← Prev: Adjust your Images using Color Lookup Next: How to Color Tint a Black and White Photo in Photoshop →