This Thanksgiving we were so excited to have our daughter and her family, our son and his family, and my father- and mother-in-law with us for Thanksgiving. Because we all live in such different areas of the state, it’s been several years since we were ALL together at the same time. There were 12 of us in the house for 4 days. It was chaotic, it was loud, but it was so much fun.

We cooked, watched holiday movies, went for walks, watched the little ones ride their bikes, sat out on the patio and enjoyed beautiful sunsets – and just generally enjoyed each other’s company.

We reminisced about previous holidays and special events. As we shared,  I noticed that what made us laugh, and get that warm fuzzy feeling was not how perfectly the table had been set, or how good the food was. It wasn’t that everything was perfect. It is what wasn’t perfect that made the event memorable.

Like the year we had the family over and were going to our church’s Christmas Eve service. I put a frozen lasagna in the oven so it would be ready for us to eat afterwards. Unfortunately, I forgot to turn the oven on. There were NO restaurants open on Christmas Eve, and the lasagna was still pretty frozen. So we cooked up some spaghetti, and that was our Christmas Eve dinner, at about 9:00 pm.

Or one Thanksgiving, when someone put a ton of potato peels down the garbage disposal.  The disposal backed up and we had a sink full of yucky brown water and little bits of potato peel, and a clogged drain. Dinner preparations came to a halt while that mess was fixed.

When we were first married, and I knew next to nothing about cooking, I bought a 21-pound turkey for 4 people to eat.  We still talk about that.

So as I sat there, observing my family interacting with one another, I wondered what the memories of THIS Thanksgiving would be.

Or could it be the fact that I cooked, for the first time ever, a sweet potato casserole?  I asked a friend to send me her recipe, and she sent only the first page of it. I was able to read the ingredients and how to mix everything, but the rest of the recipe, along with the temperature and baking time were missing. No problem. I just would Google it.  Found the temperature and time, and put that beautiful dish in the oven.  What was missing from the partial recipe though, and what I didn’t know, is that you don’t put the marshmallows on the top of the casserole when you put it in the oven.  Which I did.  The marshmallows all melted, of course, and the casserole looked like soup. No pretty toasted marshmallows on top.  Well, now I know.

There were other little things too, that I know I will remember.

I imagine it’s this way for most families.  It’s not perfection that draws us to one another; it’s imperfections. It’s helping one another overcome adversities that builds relationships. No matter how large or small that adversity is.

Is a ruined sweet potato casserole a big deal? No. But my family helped themselves to that terrible looking dish, and said it was good.

It wasn’t. I tasted it. But that’s not the point. They tried to make me feel better.

I wish I would have taken a picture of the casserole. Honestly, I didn’t even think about it because I was so busy getting everything else on the table.   But here is one of my favorite photos. Definitely not contest-worthy; just a snapshot in time. Owen, fascinated by a flashlight of ours that he alternatively used as a flashlight, a cell phone, and a camera.

When I went to get him up in the morning and reminded him to go to the bathroom, he said, “I can’t right now, Grandma. I need to go plug in my cell  phone.”

What will your family remember from this Thanksgiving?  I’d love to hear! 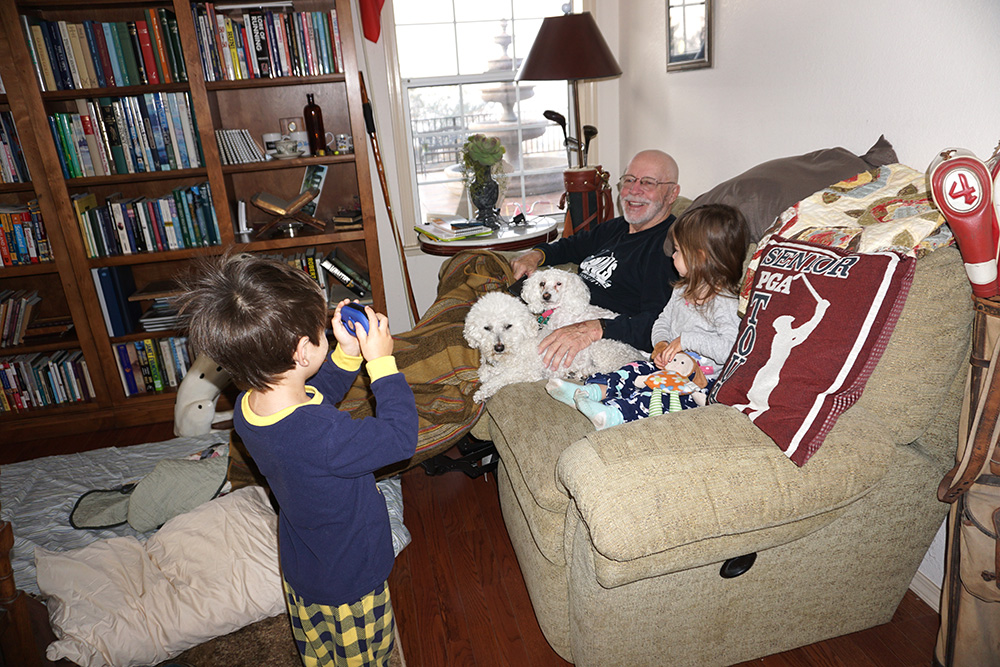