This weekend, our grandson, Owen, who is almost 5 (as he will tell you), and our granddaughter, Ella, who is 3, are spending the weekend with us. As I was planning different activities, I started thinking about the grandparent / grandchild relationship. I decided to Google the subject and came across a must-read article if you are a grandparent. Or even a parent, or a grandchild.  10 Life Defining Lessons I learned from my Grandparents.  What a great opportunity we have, as grandparents, to influence our grandchildren.

On the lighter side, it also gives us a different perspective on things. Like progress.

Owen and Ella don’t know what camera film is, but they know that they should be able to see a picture of themselves right after it is taken. Either on a camera or a phone.

They would be confused if they saw a phone attached to a wall, but know what cell phones are. I can’t imagine what they would think of a phone with a rotary dial. Or a Party Line.

Last night we took Owen and Ella to one of their favorite places here, Robert’s Frosty.  They love their swirl ice cream cones dipped in chocolate. One of the local vintage car clubs was there for their monthly outing. There were at least a dozen beautifully restored vintage cars parked in front.

Owen, even at almost 5, is a car kid. He can walk through a parking lot and name the make of almost every car that he sees.  When I asked him how he does that, he replied: “It’s easy, Grandma. I just look at the “car badge.”

So the shiny, brightly colored cars at Frosty’s really captured his attention. Owen liked this red and white car most of all. He didn’t recognize the “car badge” for this one, but he did tell us that it was “very, very old, and was called an automobile.”

While I’m not old enough to have ridden in one of these, I still would have called it a “car.” But to him it was quite ancient. Somehow that made me feel just a little bit older last night.

What makes you feel a wee bit older when you are around your grandchildren? 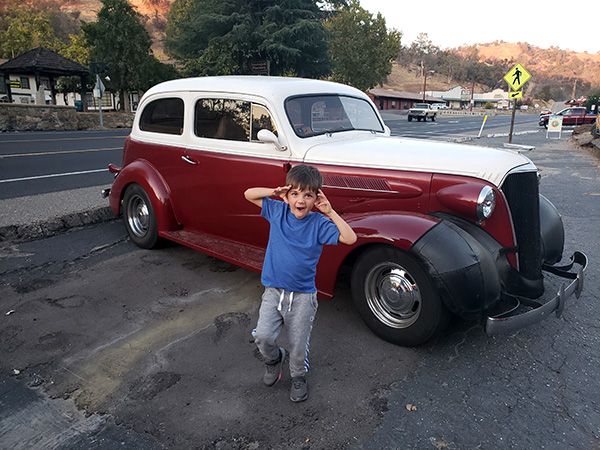