Who remembers Art Linkletter’s television show, “Kids say the Darndest Things?”    It’s true! Kids DO say the darndest things!  I know we all have stories about the cutest things our kids or grandkids have said.  There have been so many times when I have wanted to share some of the things that my 3 1/2 year old grandson, Owen, has said, but another thing that is true is that no one else thinks our grandkids are as cute or as funny as we think they are…. so I’ve hesitated.

But today I can’t resist. Monday and Tuesday of this week, I took care of Ella (19 months) and Owen all day and evening.  It was entertaining to hear the things Owen had to say. I’ll share just a few:

I took the kids to PetSmart to look at the puppies. (Just trying to find fun things to occupy our time!) As I was pulling out of the parking lot, a car was coming to my right. If I had been by myself, I could and would have safely pulled out ahead of him.  But with my precious cargo in the car, I was being extra careful, so just decided to wait until the car passed.  The car behind us honked at me, but I waited until the other car had passed by.

(True. I think that comment came from the fact that we had been playing with his cars and race track earlier that day; but somehow I felt he was defending my actions – and even though he’s just 3 1/2, it felt good!)

Owen was on the floor playing with his cars, and I was laying on the floor next to him.  My friend Diane had created a JibJab movie for Owen in which Owen took on the character of multiple cartoon characters and we were talking about each character: Spider Man, the Hulk, etc.

So I quickly grabbed my laptop and went to You-Tube. I introduced Owen to Casper the Friendly Ghost.  And he liked him. 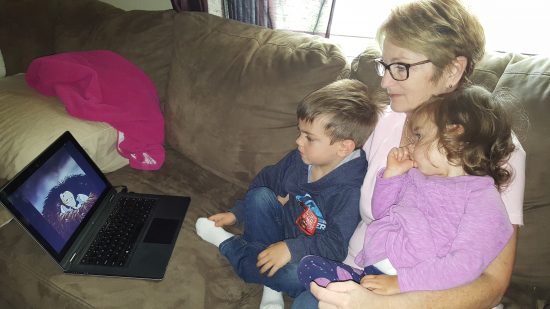 Do you have funny stories or comments from your kids or grandkids that you are holding onto? Please share!  We all need to laugh, no matter whether it’s our own child/grandchild or not.

← Prev: How to Customize Photoshop Brushes Next: How to Use Color Balance Adjustment →