Have you ever seen a celebrity, of any sort? Up close and personal, I mean. Not at a concert or performance, but just in your everyday life.

In 2014, when I was guesting at creativeLIVE with Michelle (NAODS), we were sitting in a quick meeting in the lobby and there was a general buzz running through the atmosphere.  We were told that Richard Branson was in the building. I caught a quick glimpse of him as he walked by.  (I had to admit at the time I didn’t know who he was and had to ask Rick what all the fuss was about.)

Rick saw Neil Young in the 1960’s (Buffalo Springfield at the time, later the musical group became known as Crosby, Stills, Nash, and Young) at a Denny’s restaurant in Riverside. The group was sitting at a table next to Rick and his buddies, and Rick struck up a conversation with them. They spent the evening talking music.

In 1969, Rick was having dinner at a Colony Kitchen restaurant in Corona, when he noticed Joe Namath sitting at the bar. Mr. Namath was in town to make a movie with Glen Campbell. He enjoyed some conversation with him and then threw a football around for a while in the parking lot. This was pretty cool since it was right after Joe had won the Super Bowl.

In 1991 Rick went to a local driving range to hit golf balls.  Rick noticed a young boy driving balls. It was 15-year-old Tiger Woods, who was accompanied by his father. In 1997 we went to a wedding at a private country club and saw Tiger and Kevin Kostner hitting golf balls on the driving range. Tiger was gracious enough to pose for pictures with the Bride and Groom when they were having their photos taken prior to the wedding.

Rick is a retired police officer from the city of Newport Beach. John Wayne and Dennis Rodman lived within his area, and he had multiple conversations with both men.

Rick also ran into Alfred Hitchcock at the Los Angeles International airport in the late 1960’s, but he didn’t talk to him.

We both ran into Dallas Raines (Southern California Meteorologist – television Weatherman).  Rick, being the super-social person he is, struck up a conversation with him, while I slinked. I’m a bit shy in those circumstances.

We took an elevator with Frankie Laine in Las Vegas once, on the way back to our hotel room.

Rick’s cousin, Carol Andreson, was in quite a few movies with Dean Martin and Jerry Lewis. Rick spent time on the set with these stars, but I tell  him that doesn’t count as an “everyday sighting,” but he still likes to include it on his “celebrity list.”

When Rick was 18 years old, he was working on John Tunney’s senatorial campaign and one of his assignments was to “meet and greet” Rosey Grier. Interestingly enough, Mr. Grier spoke at our church about 40 years later. Rick and a friend were sitting on the back row of the church that morning because they were going to sneak out early to go to a Rams football game.  When the congregation stood up to sing, they saw their opportunity to slip out unobtrusively – or so they thought. From the podium, Rosey Grier called to them and told them the service wasn’t over yet and maybe they needed to stay to hear the rest of what he had to say. Oops.

We both saw a group of musicians at the San Francisco airport in the late 1970’s. They had t-shirts on with the name “Foreigner” emblazed across the chest.  They weren’t famous at the time, so I’m not sure we can count this as a celebrity-sighting, but they have since become very well-known as a rock band.

This weekend we were at an antique fair in Old Town Clovis.  We were meandering down the street, looking at all of the goods, when Rick whispered to me that he just saw Dr. Mark Hall-Patton, the Beard of Knowledge from Pawn Stars.  (He is also the Administrator of the Clark County, Nevada Museum.)  He was a dead-giveaway in his red shirt and straw hat. And his beard is quite unique.  Rick was standing close to Dr. Hall-Patton, and when he turned around, Rick introduced himself, told him how much he enjoyed the information and knowledge he shared on Pawn Stars, and asked if he minded if I took their picture. Dr. Hall-Patton, who was warm and friendly, without a second’s hesitation, gave his consent.

Another sighting to add to our list!  How about you?  Who have you seen? 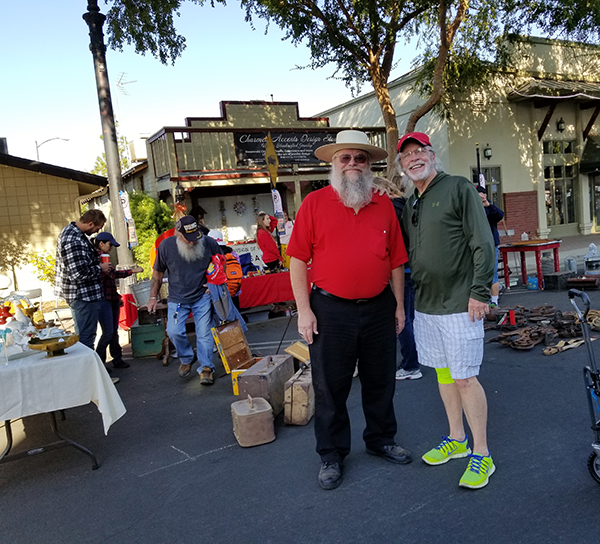