What I Learned from a 4-year old

I spent this week at our son Brian’s house. Our daughter-in-law was out of town all week, and Brian worked during the day; so I got to take care of Owen (4) and Ella (2) full-time.  It brought back so many memories of when our own children were those ages, and how much fun it was to watch how their minds work.

Ella is developing her own sense of independence now and I continually heard, ” I can do it.”  Whether it was putting on her shoes, climbing into her car-seat, or picking up her toys, she wanted to do it by herself.  Of course, when she got tired and wanted some cuddling, she melted my heart with her, “Up me,” which meant she wanted me to pick her up and hold her.

Owen continues to make me laugh. He’s 4, going on 30. For instance, I was making protein shakes for Ella and him. Now, I’ve made these before. Lots of times.  But this time Owen decided to tell me how to do it.

The only thing he missed was putting the lid on the big cup before shaking.  That could definitely be a problem.

One day, as I was driving him to daycare (so I could get some work done of my own), he exclaimed, “You missed the turn!”   Our conversation went like this:

Me: Oh, that’s the freeway. Does Daddy take the freeway?
Owen: Yes. That’s the freeway, and it’s a shortcut.
Me: Okay, well, we can go that way another time.
Owen: Well, I think you should write a note and take it to bed with you so you don’t forget.

I think I’ll remember, but I know if I forget, he’ll remind me again.

As active as his memory is, his imagination is equal.

Oh, he also came to the breakfast table wearing his pants on his head, because he decided it was a Silly Day too.

Ya know what?  Every day is a Silly Day with Owen. He is loving and thoughtful, generous and helpful. I give his parents credit for instilling those qualities in him. But they have also encouraged him to just be silly. I think the world needs a little more of that.

And so I come away from this week with a vow to remember, that – yes, it’s important to be kind and thoughtful and generous and loving and all of those things. But it’s also good to just have Silly Days now and then. Who knows? I might just come to the breakfast table with my pants on my head one day. It works for him. 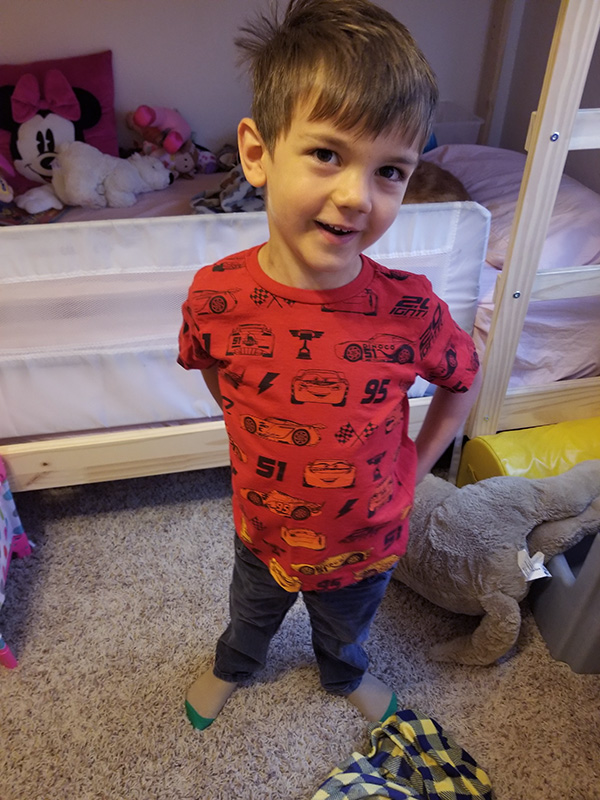 ← Prev: Spatter Overlays and a Freebie Next: One Reason why Memory Keeping is Important →