Several weeks ago, I shared with you my confusion about our dogs, Stella and Riley, always being in the same dog bed, although we have 4 beds for them. ( 2 Dogs, 4 Dog Beds, and This? ) I asked what you thought of this and almost 100% of you said you believed Riley was being protective of Stella. That isn’t something we had considered, so armed with this new thought, we started watching their interactions more closely.

We had noticed some, but not all of these behaviors before; but with your input, they took on new meaning to us.

But what really touched us was how Riley kept watch over Stella 2 days this week when she was sick. Riley didn’t crowd into bed with her like he usually does, but he also didn’t leave her side. He just sat or laid on the floor by her. Protective, it would seem. Sometimes he would look at me and I could almost hear him saying, “Can’t you do anything??”

One pivotal moment came in the evening though, when I had given Stella white rice for dinner to help her tummy get better.  You could just see how much Riley wanted that rice. He kept edging over to Stella’s dish, smelling it ( I guess white rice smells good to dogs. ), looking longingly at it…. but he didn’t touch it. Maybe that’s just his good manners, but I prefer to think that he knew she needed it and let her have it.

And what did that get him?  Well, from us, he earned a little rice of his own, and from Stella he earned, perhaps, just a little more space in the bed next time they cuddle up together.  That really remains to be seen though. 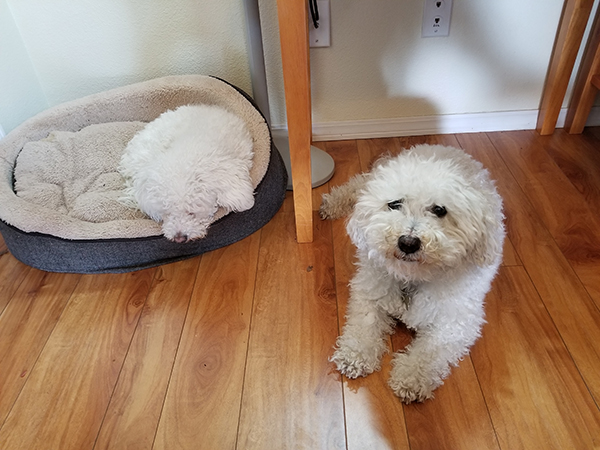