Is it a Matter of Perspective or Communication?

Rick used to entertain our guests with his illusions or was asked to entertain at our friends’ parties.  But over the years, his interest dwindled, until finally, a fine coat of dust settled on the deck of cards that sat on the top shelf in his closet.

Owen was given a Magic Box, full of tricks, for his 6th birthday last November (as well as a “real” Magician’s hat and red-sequined vest).  Owen is now obsessed with tricks and performing. When Rick told Owen, that he used to perform magic tricks too, their bond grew one strand tighter.

Over the past few months, Rick has been polishing his “old” routine, as well as learning new tricks/illusions.  A few days every week he shows me something new he has learned.

Yesterday was one of those days.

It didn’t go well. The trick wasn’t working. Rick had a puzzled look on his face. “Let me practice a bit; I’ll call you back in a few minutes,” he said. That happened twice. Maybe 3 times.

All in all, he performed the trick at least 6 times. It never worked. He was so frustrated. He “knew” he was doing it right, but the result was always wrong.

“Let’s do the trick with the cards facing up,” he said, “so I can see what I’m doing wrong.”

Rick slowly and methodically went through each step of the trick, narrating every step of the way.

I guess that’s why the trick wasn’t working (I said with a smirk on my face and, I’ve got to say, a bit of laughter that I tried to stifle).

We had quite a conversation about what “the bottom card” actually meant. I still say, with the directions I was given, I was right in saying it was the 5 of Hearts.

Now, if Rick had told me that I was going to lay the cards face-down, and I was to remember the card that was on the bottom of the face-down stack, yeah, sure, it would have been the 7 of Diamonds.

So what made the trick fail? Was it my perspective or his lack of communication? 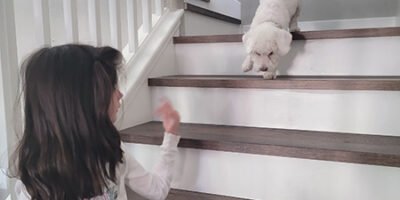 The Joy of Watching our Grandchildren Grow Up