You’re Never too Old to Fall

That’s right. You’re never too old to fall. Today I proved that to be true. I fell. HARD. On our asphalt driveway.. and then rolled a bit on some loose gravel before coming to a stop.

You remember Stella?  Stella who went to obedience school a few months ago?  Stella who did graduate, but doesn’t quite understand that “come” means, “come-whether-you-want-to-or-not.”  Or maybe she does understand and just chooses to do what she wants anyway.

Usually, I don’t let Stella out of the house unless she’s on a leash. But today, I decided to give her a little trust. I let her and Riley out when my husband, Rick, who had been gone for a little bit, came home. Stella and Riley love to run outside when he drives into the driveway. They act like he has been gone for days, even if it’s just 15 minutes. So I let her out of the house, no leash, with Riley. After she greeted Rick,  I told her to “come.” She looked at me then took off as fast as she could run up the driveway.  She’s just so cute and mischievous looking. I have to say it would be pretty funny if it weren’t so frustrating – and well, disobedient.

We live on a mountain, and our house sits down the mountain, with the road up above us. Our driveway is like an upside down “Y” – with the bottom of the Y being where the driveway meets the road, and then as the driveway winds to our house, it separates and breaks into one driveway that goes to the front of the house, and the other driveway going to the opposite side of the house. One side is longer than the other. Stella was running up the longer side, so I ran up the shorter side to cut her off where the driveways intersect.

I had my eyes on her, and she was darting and weaving through some bushes.

The next thing I knew I was mid-air, and I knew I was falling. BAM. Down on my right hip and hand, then the momentum I had going caused me to roll down the driveway a bit – just to ensure that I had scrapes and bruises on both sides of my body.

The sweetest thing happened though. As I lay on the ground, still a little stunned, Stella came right up to me and started nuzzling my neck.

I didn’t have the presence of mind to grab her collar. But she stayed there until I finally stood up. Then she took off again. Of course. She was a little tentative though. She ran down the driveway toward the house, and when I told her to “come,” although she didn’t come – she did sit and she did stay.  I’ll take that.

Although I have several bruises, a BIG knot on my leg, and a cut on the hand on which I landed, I had forgotten, from all my tumbles as a child, that it’s really the road rash that hurts the most!

Be careful! It’s dangerous out there! 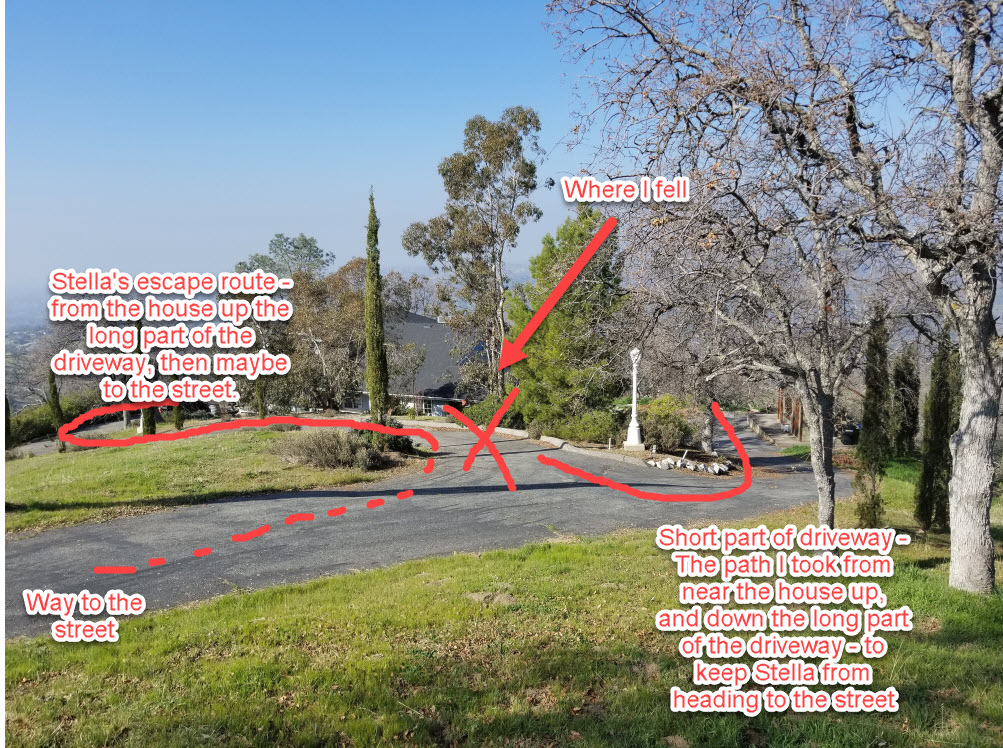 ← Prev: Straightening Images: The Basics Next: How to Create Stained Glass Ornaments in Photoshop →