A Family Crisis and a Happy Ending

Every person, every family, has times of crisis. It’s how we deal with those times that either make or break the individual or family unit involved.

June 2, 2016 we received a telephone call from Melissa, our daughter-in-law. The previous night Brian, our son, had been “acting strangely.” Thinking it was a reaction to a new medication, she took him to the Emergency Room for evaluation.  The test results were not what she, or any of us would have anticipated.  Brian had a high level of alcohol and marijuana in his system.  When Melissa questioned Brian about this, he admitted to the alcohol use but three times denied the marijuana use, even though the tests were conclusive.  Because of the lying, not the substance abuse, Melissa took Brian to a hotel, dropped him off, and called us to go pick him up.

When my husband, Rick, and I picked Brian up, he was embarrassed and remorseful. But he was also glad he had “gotten caught.”  He admitted to drinking secretly for 2 years. He said he had tried to stop multiple times and couldn’t. He was afraid to admit the trouble he was in, afraid Melissa would leave him, afraid of being so out of control. But now it was out. We all knew. and he could seek the help he knew he needed.

Brian lived with Rick and me for 3 months, while attending Alcoholics Anonymous every single morning and attending a Substance Abuse Program 4 hours every afternoon for 90 days. He called home every morning to speak with Owen, who was 2 at the time. Brian drove the 311-mile round trip every single weekend during that 3 month period to spend the weekend with Owen and Ella.  Melissa left the house for the time he was there. Because she didn’t trust Brian with the children just yet, I accompanied him every weekend.

Brian remained sober and clean since the day his secret was discovered. He had done everything he could to begin to rebuild trust and repair the damage he had done to his family.

Once he completed his intensive treatment, in early September, Melissa agreed to let him come home.

There was still a lot of repair work to be done on their relationship – and, indeed, the determination was yet to be made about whether or not the marriage could be saved.

Addictive personalities run in my family.  My father was an alcoholic (recovered the last 20 years of his life), and his father had problems as well. Knowing that there is a genetic propensity for alcoholism, both Rick and I were always very aware and concerned about this in relation to our children. Although we don’t drink often, we never did in our home. Yes, we felt like hypocrites, sneaking off to a restaurant to have a margarita with a Mexican dinner, but we also believed we were protecting our children until they were old enough to make wise choices.

Brian was an excellent student at school, he was actively involved in our church youth group, he was your typical good kid! My point is this.…. it’s not “just the bad kids” who get mixed up with alcohol and drugs. There are other factors at play…..

“What do shopping, sex, gambling, and eating all have in common with drugs and alcohol? Each may be the object of addictive impulses and desires. As far as the brain is concerned, they all have the capacity to satisfy a craving or biochemical imbalance in response to stress or behavioral triggers – at least for a moment. Uncontrollable urges can be highly destructive and lead to a laundry list of problems….”    -Edward Geehr, MD

Here is an excellent article by Dr. Geehr:  Do you have an Addictive Personality? If Alcoholism runs in your family, or if you have questions about your own behavior or those of your loved ones, I urge you to read this.

As part of Brian’s Abuse Substance Program, parents were required to attend multiple meetings with him. Although we thought we had educated ourselves well, we learned so much about chemical dependency, the way alcohol affects the brain function, and how/why it is so very hard to quit.  I know there are many who do not believe alcoholism is a “disease,” but a choice. It’s a choice to have that first drink, and maybe the 2nd and 3rd, but when you have the genetic propensity towards alcoholism, or that genetic gene, there becomes a point when it is no longer a choice, but a need – and disease.

It was heart-breaking to watch Brian go through this difficult time. The first night he was here, he sat next to me on the couch. I had my arms around him and he just cried in his misery, saying, “I just want to go home.” It crushed us to see Brian’s hurt and despair, but it also was painful for us because we knew he had a long, painful journey ahead of him.

We supported Brian, we encouraged him, we listened to him. We gave advice when asked, and sometimes when not asked.  We felt his pain. We rejoiced with him over his successes, and urged him on, reminding him of those successes when he became discouraged about whether or not he still had a family to return to.  We prayed with him, we prayed for him.

We supported Melissa in all the ways we could. She is an exceptional woman, and she had a lot to deal with, both emotionally and physically. She was alone, feeling betrayed, the sole caretaker of the house and children, and the only financial support at the time. We adore her, and prayed for her continually. When Brian and I were there, we did all we could to help: dishes, laundry, household chores – anything we could do to ease her current situation.

From September 2016 through June 2017, Brian and Melissa put a great deal of effort into restoring their trust for each other and their marriage.  Counseling, prayer, hard HARD work.

Last Friday, June 16th, was Brian and Melissa’s 10th wedding anniversary. This year, instead of each of them spending it alone and hurt, as they did last year, they celebrated with a Vow Renewal Ceremony, recommitting their lives to each other, recommitting to their marriage.

It was beyond words for all of us.

The end of a bad year.

The period at the end of the sentence.

The past behind them; the future ahead.

There are several reasons I wanted to share this story with you:

I told you there were multiple perspectives on any situation…..

I hope this story has been encouraging to you, inspiring perhaps, but most of all given you some information you might need one day. Believe me when I say… you never know.

(Shared with the permission and blessing of Brian and Melissa.) 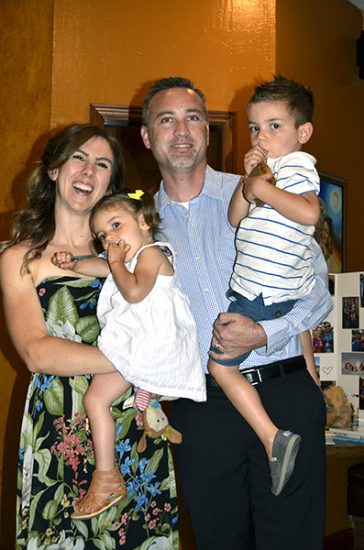