I haven’t always been a person to wake up / get up early. I mean Really Early. When I was a teenager, I could easily sleep until 9 am. When I became a Mom myself, if my kids were still sleeping, I could easily sleep until 7 or 7:30 am. But about 10 years ago my body time-clock changed somehow. I started waking up at around 5:00 am.  I thought that I had morphed into an Early Morning Person. It wasn’t very long, though, before I realized that wasn’t true.

Although I get up early, it takes me a while to Wake Up. I immediately pour myself a cold glass of Crystal Light and grab a handful of dry cereal (Barbara’s Morning Oat Crunch), sit down to read my email, and browse Facebook. It generally takes me about an hour before I’m really ready to engage with anyone in any type of pleasant dialogue. Early Morning Riser.

My husband, on the other hand, jumps out of bed around 5 and generally starts singing. “Oh, What a Beautiful Morning,” is his favorite – which, I have to admit, annoys me at that time of the morning (which is probably why he sings it). Early Morning Person.

We’ve learned to make it work. He tries to sing softly (although we differ on what “softly” means), and I let him know when I am somewhat awake.

This week I am taking care of our 3-year-old granddaughter, Ella, and our 5-year-old grandson, Owen, while our son, Brian, and his wife, Melissa, are away for 9 days on a belated 10th Wedding Anniversary trip. The Early Morning Riser vs. Early Morning Person comparison came into focus again this morning.

I was sitting in bed, with my Crystal Light and cereal, reading email on my iPad when I saw my bedroom door open very slowly.  I eventually saw Owen’s eyes through the crack in the open door. When he saw the light was on and I was awake, the door swung wide open and he and Ella ran into the room and jumped on the bed, “Grandma, you’re awake!!!” There were giggles and delightful laughter, tumbles on the bed, and (shrill) little screams. Yes, it was a precious moment. No, I wouldn’t change that for the world. Even though I was still in my “waking up” phase.

They are Early Morning People. They go from 0 to 100 miles per hour in seconds. Every day. I need to learn some new coping mechanisms since I’m going to be here for another week.

My first thought was to keep them up later at night so they would sleep later in the morning, but I don’t want to mess up their schedule.

I”ll figure it out. If you have any ideas, though, I’m open to suggestions! 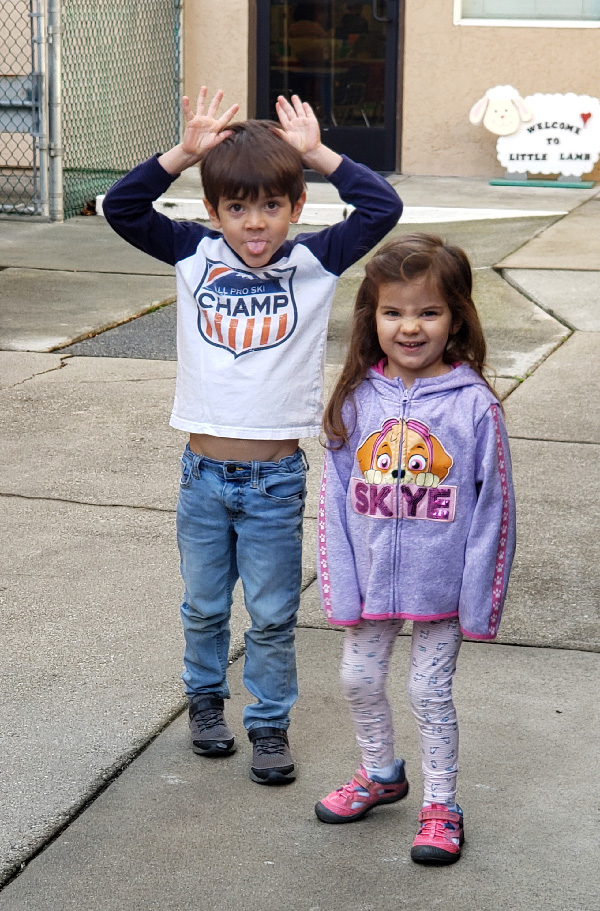 ← Prev: MyMemories Freebie: Expires Jan 13 Next: What I Learned in 8 Days →