Owen, our just-turned-6-year-old grandson, has discovered the world of magic.  He takes great delight in learning new “illusions” (not tricks). When he performs, and we ask how he did what he did, he very firmly states, and with great emphasis I might add, that “A magician NEVER REVEALS his secrets, except to other magicians.” Since my husband, Rick, Owen’s grandpa, is also a “magician,” Owen will take him by the hand and lead him out of the room, and share with him.

Last month, we were at our son’s house for Thanksgiving and were going to go to his in-laws house that afternoon for a Thanksgiving feast. That  morning, I asked Owen if he would like to put on a magic show after the meal, and he excitedly said, “YES!”  I told him Rick and I would help him put the show together, but he said he didn’t really need our help. He immediately took charge and told us what illusions he was going to do. He said he needed a curtain, no, 2 curtains, so he could part them when he made his entrance. He said there should be an intermission, with snacks. And he said he would need to remember to take a pen and paper “because at the end everyone is going to want my autograph.”

Rick and I found something to use as a curtain, and Owen made us practice at least 5 times to make sure we were holding it correctly for his grand entrance.  We put some popcorn in baggies for the snacks. I made signs with the name of each illusion written on it, to be used as an announcement. I told Owen it might be a good idea to write out his autograph now, since his chosen signature was sort of long: “Owen the Great.” He agreed, and after 4 signatures, he got tired. It’s a long signature, after all. So we decided “one per family” would be our strategy for passing out autographs. We packed everything up and Owen couldn’t wait to go.

After dinner, as chairs were being arranged in rows in the living room, Rick and I were with Owen in a back room. He couldn’t stand still, he was so excited. “I can’t BELIEVE this is my FIRST magic show,” he said. I’ve gotta tell you that my heart swelled with love for this little boy, for his enthusiasm, his joy, and his sense of adventure.

Rick, the Announcer, introduced Owen the Great, and the show began. Family members clapped and cheered and laughed, and – honestly? – it was the best part of Thanksgiving.  It was truly magic. 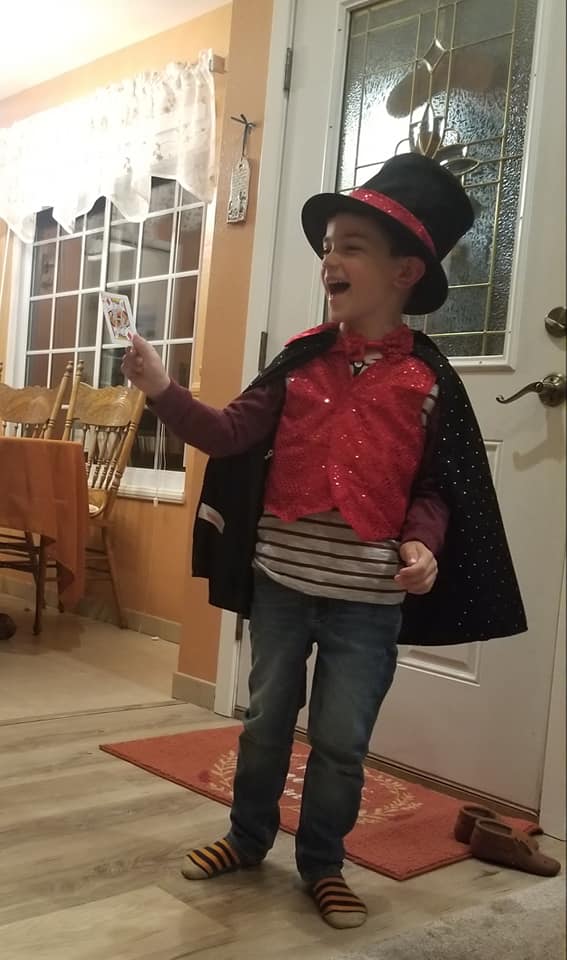